We have had a great time here in Stratford upon Avon.  We went to a couple of National Trust homes that are open near by.  The first one is called Baddesley Clinton.  This a moated manor house from the 13th century.  It was the home of the Ferrers who were Roman Catholic when the Reformation was overtaking England.  They hid priests from the authorities and had several “priest holes” built into the house.  A priest hole was a hiding place for Catholic priests if the house was raided.  It is a lovely home and so interesting to visit.

In the 19th century, when they could practice their religion privately, they built a small chapel to hear Mass.

We also went to Packwood House.  This was a Tudor home that was restored to its Tudor interior by Graham Baron Ash in the 1920s.

A sun dial at Packwood House

One of the best things about returning to Stratford was seeing some people that we got to know last year.  These two ladies work at the Shakespeare Hospice bookstore.  Last year they helped me find some old books that we falling apart for me to use in my mixed media art.  They helped me again this year, thank you ladies. 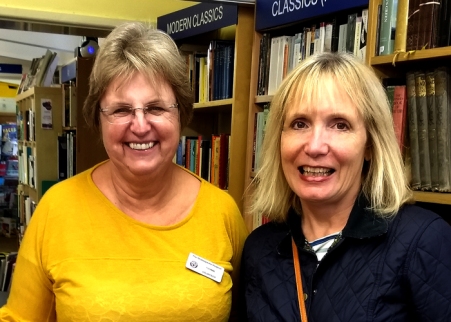 I also got to tour Shakespeare’s school house.  I did not get to do that last year so I was very happy to visit this 15th century building that was Shakespeare’s school for 7 years of his life.  They do an excellent job of bring you into the experience that Shakespeare might have lived,  Here is a photo of the school master at his big desk.

So we will bid Stratford adieu tomorrow and say goodbye to sweet Enzo.